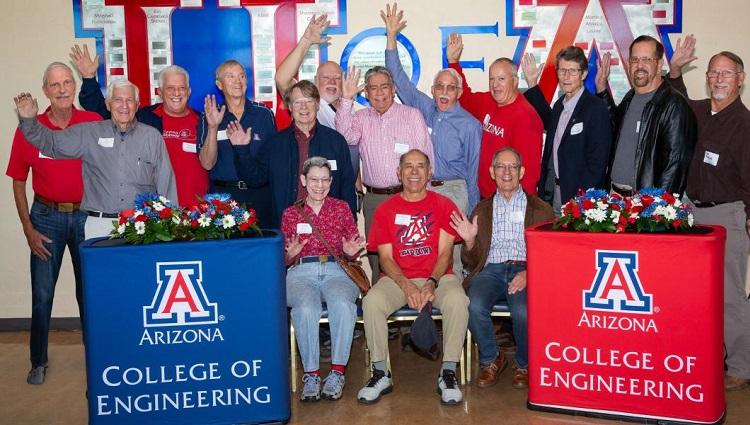 Members of the Class of 1969 celebrate their 50th college reunion at the 2019 Engineers Breakfast. (Photo: Martha Lochert)

On Nov. 1, 2019, men and women gathered to reflect on the 50 years that had passed since they graduated from the University of Arizona's College of Engineering. The engineering Class of 1969 used the time to share common memories of maintaining busy course schedules, forming lifelong friendships and learning to think like engineers.

Among the reunion members were CAEM graduates John Bernal and Kent Erwin.

After graduating with a degree in civil engineering, Bernal spent 30 years working for Pima County, retiring as the deputy county administrator for public works in 2017. The highlight of his career, he said, was when then-President Bill Clinton appointed him as the U.S.-Mexico commissioner for the International Boundary and Water Commission from 1994 to 2001. In the role, Bernal was responsible for adhering to treaties between the two countries about sharing water resources from the Rio Grande and Colorado rivers. The North American Free Trade Agreement, or NAFTA, had just been initiated.

“The advent of NAFTA allowed me to participate in the planning and implementation of numerous water infrastructure projects to improve the quality of life along the international border for both countries,” he said.

Erwin was active in ROTC and joined the U.S. Army after graduation. He took a position at McDermott International in 1974, in the midst of the oil crisis, and stayed there until his retirement 24 years later.

Though his career took him to nine different countries, including Australia, Belgium, Canada and the United Arab Emirates, one of his favorites was Russia. He lived there for 10 years as one of the initial project directors for Sakhalin-II, an oil and gas development on Sakhalin Island. It was the largest 100% foreign-owned oil and gas project in Russia at the time.

The most memorable piece of advice he got at UArizona was simple. It came from a professor emeritus who gave a class on how to navigate the business world, and it’s stuck with Erwin since his senior year: “If you have something to say, say it and sit down.”