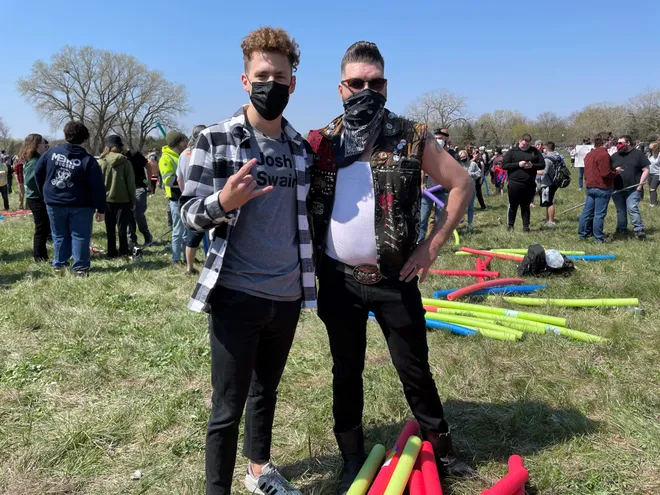 No, we're not joshing you: The organizer behind April's famous "Josh Fight" in Lincoln, Nebraska was none other than civil engineering student Josh Swain. Originally conceived out of a joke for other people named "Josh Swain" to win the right for that exact username on social media turned into a viral sensation with nearly 1,000 participants battling with pool noodles.

Swain spoke with The Arizona Republic about the phenomenon, explaining how he added about nine other Josh Swains to a group chat, invited them to a battle with a date and coordinates in Nebraska, and posted it to Twitter. The post went viral on Reddit and Instagram, and the impending Josh fight blew up. A few months before the date, Swain saw how many people were sharing his post on social media, and decided to actually book a plane ticket from Phoenix to Nebraska.

A week before the fight, Swain picked a new location, Air Park green area, that was not the private property of the original coordinates. He also started a fundraiser for the Children’s Hospital and Medical Center Foundation for the state of Nebraska and a food drive for the Food Bank of Lincoln. He figured the fundraiser would bring in at least $100. Ultimately, the gathering raised more than $10,000 for the Children's Hospital and more than 200 pounds of food for the food bank.

And the Josh to beat them all? A four-year-old Josh who had been treated at Children's Hospital in Omaha.

“It’s like one of those movies where a superhero does something and thinks, ‘Oh my god, I have power,’” Swain told The Arizona Republic. “I’m literally just a dude from Arizona.”