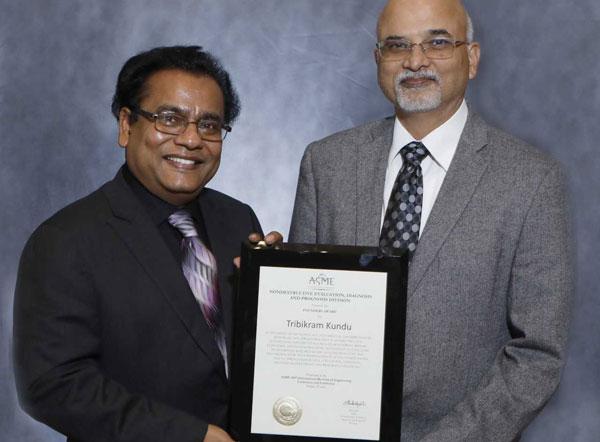 The American Society of Mechanical Engineers, or ASME, has recognized UA professor Tribikram Kundu for his work in nondestructive evaluation with the 2017 Founders Award, the most prestigious honor of the Nondestructive Evaluation, Diagnostics and Prognostics Division of ASME.

The award highlights Kundu’s contributions to the field, from having published 326 technical papers -- 166 of which have been published in peer-reviewed scientific journals -- to his five research monographs and two textbooks, and being named the founding editor-in-chief of the ASME Journal of Nondestructive Evaluation, Diagnostics and Prognostics of Engineering Systems.

"It means a lot to me because my bachelor’s degree was in mechanical engineering, and this is an award from the American Society of Mechanical Engineers," Kundu said. "It makes me humble to have these two recognitions -- founders award and editor-in-chief of an ASME journal -- in the same year."

Kundu’s nomination was based on his significant and original contributions in both basic and applied research in nondestructive testing – evaluation of a component and/or its parts without destroying them -- and structural health monitoring by ultrasonic and electromagnetic techniques, according to the award’s citation.

Kundu’s interests are in structural health monitoring and material characterization by ultrasonic and electromagnetic waves, and he urges any students interested in his work to get in contact with him to see how they can become involved.