Earthquake Engineering Research Aims to Save Lies, Billions of Dollars 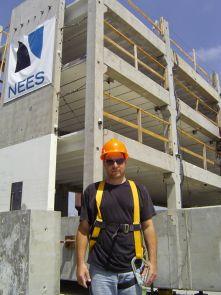 Article taken from the University of Arizona website and may be found here.

The 6.7 magnitude earthquake that struck the Los Angeles community of Northridge at 4:30 a.m. on Jan. 17, 1994, killed 57 people, injured more than 5,000, and caused an estimated $20 billion in damage, making it the costliest seismic disaster in U.S. history.

Structures that should have withstood the quake, such as parking garages and freeway overpasses, collapsed and set in motion a major overhaul of building codes.

"If the earthquake had happened three hours later..." The potential horror of what could have been causes Professor Robert Fleischman's speculation to trail off. Fleischman, the Delbert R. Lewis Distinguished Professor in Civil Engineering and Engineering Mechanics, is about to finish the first phase of a 5-year, $2.5 million earthquake engineering study that will lead to improved building codes, which will protect buildings and their occupants, from earthquakes.

The research project, headed by Fleischman, has been conducted jointly by The University of Arizona, the University of California at San Diego and Lehigh University. The research was funded by the Precast/Prestressed Concrete Institute, the National Science Foundation's Network for Earthquake Engineering Simulation and Grant Opportunities for Academic Liaison with Industry, and the Charles Pankow Foundation. Fleischman recently secured funding to proceed with the second phase of the research project.

The project involved building a 500-ton concrete parking garage and then subjecting it to a magnitude-7 earthquake while measuring the stresses that almost reduced it to rubble.

The million-dollar test required the construction of a 3-story, half-scale precast concrete structure on a giant shake table at UC San Diego's Englekirk Structural Engineering Center. About 600 instruments located throughout the structure measured its responses to fifteen 20-second quakes simulated by the shake table.

Many of the structures that failed in the Northridge earthquake were built using precast concrete. This is a very economical construction technique because the component slabs are made offsite. "Quality is much easier to control, and therefore high," said Fleischman. "And the precast pieces last a lot longer than concrete that is cast at a construction site."

Precast concrete's strength derives from prestressing. We've all passed construction sites and seen steel rebar sticking out of unfinished concrete structures. Prestressing involves stretching this steel in a mold, or bed, and then pouring the concrete to embed it. Once the concrete is dry, the stretched steel is cut. "It's like a big rubber band," says Fleischman. "The steel tries to shorten and it squeezes the concrete."

These precast and prestressed slabs are transported to the construction site by truck and dropped into a concrete framework by crane. The slabs sit on ledges in the framework, and are usually welded to adjacent slabs where the steel protrudes. These joints are weak points in the structure, and can come apart like a zipper during an earthquake. "When building a precast structure in California, you have to actually pour cast-in-place concrete on top of it to hold it together," said Fleischman. "And that kills the economic advantage."

The enormous structure that Fleischman's group almost leveled on the shake table was built based on computer models derived from hundreds of tests and simulations carried out in the first phase of the project. In addition to the spectacular shake table test, the group has also conducted many hybrid tests. "It's called hybrid because it's part analytical, part physical," Fleischman said.

For instance, the group wanted to test a critical floor joint to study the behavior of some reinforcing they had been working on. The joint components were fabricated in Pennsylvania and assembled in a lab at Lehigh University. Attached to the components were actuators that could be made to shear and open and close the joint, which allowed the researchers to simulate how the joint would behave in a real earthquake. "That joint did all the things it would do if it were sitting in a building during a quake," says Fleischman.

While Lehigh did the physical part of the test, UA did the analytical part. Although the actual structure was in a lab at Lehigh, researchers in Fleischman's lab in Tucson controlled the actuators and monitored the stresses and forces within the critical floor joint.

These tests have yielded "gobs and gobs of data," said Fleischman. Like the million-dollar shake table test, the hybrid tests yield high-quality data from actual physical simulations, but at a fraction of the cost. "You build the part that's key and the rest is virtual," says Fleischman. "The data enables us to understand how structures behave, and we can use it to create computer models."

The second phase of the project was given the green light, said Fleischman, "because the computer models we've developed are so advanced, and my students and I can do all this significant research in the next couple of years refining our results." Fleischman says his doctoral students Ge Wan and Dichuan Zhang have done "a tremendous job at developing three-dimensional models of structures and modeling everything that breaks."

Code officials give great credence to Fleischman's results because his group has studied the behavior of real structures, both partial and entire, under earthquake conditions. The computer models can now predict to a high degree of accuracy how any given structure, or component of a structure, will behave when an earthquake strikes. "Because our models are calibrated or verified by a test of a structure, code officials are confident of our recommendations," Fleischman said.

The next step of the research project is to actually get some of these research results incorporated into building code. Phase 2 will, for the next 6 months, see the research group using its computer models to build and test many different types of virtual structures. "We need to make sure that we have our design factors right and that our models are making sense," Fleischman said.

Academia and industry have worked closely on this project to improve codes, so far with success. Their work has already been incorporated into the National Earthquake Hazards Reduction Program, which was created by Congress to reduce earthquake-related losses through improved design and construction methods and practices. Think of this program, said Fleischman, "as the guidelines that inform the code. The next step is to put it into the code."