Now Boarding: Tucson to Phoenix by Bus in 45 Minutes 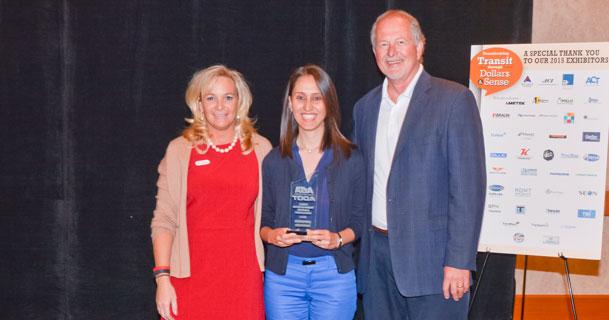 Dreading that nearly two-hour drive from Tucson to Phoenix? Someday you may get there in less than half that time, on a semi-autonomous bus traveling along Interstate 10.

Need convenience as well as speed? You’ll have several boarding locations from which to choose in both cities.

Under Chiu’s supervision, Ranjbari spent a good part of 2014 on survey design, interviewing and collecting 600 responses from Tucson and Phoenix residents, and analyzing survey results.

Ranjbari said, “We found that due to HSBT’s much shortened inter-city travel time and greater flexibility in bringing passengers closer to their final destinations, it will have the highest market share among all transportation modes, including passenger rail and automobiles.”

How will the HSBT navigate the heavily traveled I-10? Plans call for a dedicated guideway in the freeway’s median.

From Tehran to Tucson

After earning undergraduate and graduate degrees and working as a transportation planner in her native Iran, Ranjbari came to the University of Arizona in 2012. Experienced in researching many fields of transportation, such as public transit, network and demand modeling, traffic flow models, and safety, she said her main research interest is public transit.

She’s pursuing that interest through her PhD dissertation on the market analysis, network design and feasibility study for the Tucson-Phoenix HSBT.

“I’m super excited about this study,” Ranjbari said. “Every step of it has been very interesting, and it’s wonderful to see this idea gradually gaining interest and visibility from Arizona residents and other stakeholders.”

Her excitement is shared by the Arizona Transit Association, which awarded Ranjbari its 2015 Public Transit Scholarship in March. At the March 2015 AzTA board of directors meeting, members stated they had had this scholarship for a couple years, but never found the right person for it.

AzTA gave Ranjbari a second honor: an invitation to make a presentation on HSBT at the organization’s April conference held jointly with the Arizona Department of Transportation. Ranjbari introduced the HSBT concept and research findings to 50 transportation professionals.

“The support from the audience was incredible,” she said. “Many professionals offered pro bono services to help us advance our work.”

Back on the UA campus, Ranjbari has been president of the student chapter of the Institute of Transportation Engineers since 2014. Under her leadership, the chapter organized several invited talks, booth exhibitions and conference trips that raised its visibility in the transportation profession.

It’s been one of the most active years for the decade-old UA ITE, and Ranjbari’s efforts earned “Outstanding Graduate Student Leader” recognition at the 2015 UA Club Awards banquet. But, as she says, “You can't be a leader without a team, and I had a wonderful team.”

What’s next? Ranjbari has about two years left in her doctoral program, and she’s considering academic and industrial opportunities.

“Becoming a professor is a very strong option,” she said. “I love teaching, and seeing the learning sparks in the students’ eyes is just a pure joy.”

Then there’s HSBT. It’s a dream she wants to keep pursuing for the Tucson-Phoenix corridor, and, possibly, beyond.

Who knows? It may be a cost-effective solution to traffic snarls between Los Angeles and San Diego, Seattle and Portland, on Interstate 35 in Texas, and many other U.S. travel corridors.